The announcement was made on Saturday (December 6) by Events NSW chief executive Geoff Parmenter at the Good Living Grower’s Markets in Pyrmont.

A number of Australia’s leading chefs were also in attendance, including Tetsuya Wakuda, Tony Bilson, Justin North of Becasse and Peter Gilmore of Quay. 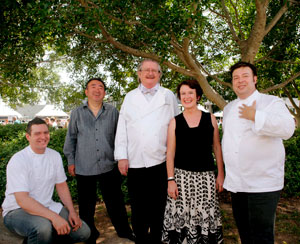 Savill, who is known as co-editor of the SMH Good Food Guide co-editor and as a contributor for Good Living said she had been hoping for years for Sydney to stage a festival of this calibre.

“Sydney has a world-class food culture and world-class restaurants that have long been recognised internationally,” she said. “But it’s time to focus the message via an exciting program of top-calibre food events.”

She said the festival will see some of the best chefs from the region and beyond come to Sydney to share their skills and also showcase Australia’s best to the world.

NSW Minister for Tourism, Jodi McKay, said the sate would work hard to promote the festival.

“Tourism NSW will promote the festival as part of a major marketing campaign that will capture the essence of Sydney in springtime and embrace the lifestyle we all know and love that is unique to our harbour city,” she said.

“The opportunity to spend a day with some of the world’s leading chefs sharing their secrets and recipes at the first international master class staged in Sydney will attract visitors from interstate and abroad.”