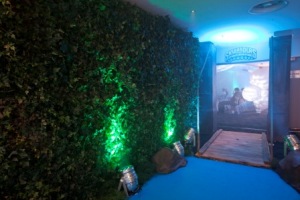 Workshops Events created a world within a world for the launch of Skylanders Spyro’s Adventures game.

Globally, the game has been deemed a breakthrough in entertainment for the toy and video game industries and ultimately involves a new collection of characters, an engaging storyline and an immersive interactive experience. Activision, eager to bring the experience of the game to media and retail partners alike wished to create an event that would bring the characters and world to life. 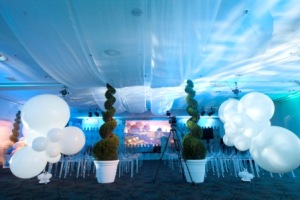 Held in the Ted Hopkins Room at Luna Park, the Workshop Events team transformed the space, creating a fantastical journey into the world of Skyland for 140 guests

As if stepping through a monitor or console, guests entered the building via a custom built screen-like facade at the entrance and were thrust into a world of black. Moving up the stairs and to the landing, creeping ivy adorning the stairwell barricade, stepping stones over a blue river, and ivy covered walls led them across a drawbridge and into the world of Skyland.

Entering Luna Park’s Ted Hopkins Room guestswere greeted by soft, low lying fog, clusters of giant white balloons with cloud effect projections, creating the illusion of floating through the clouds. Beautiful topiary trees positioned around the room alluded to the sensation of flying over a forest.

The stage set and rear projection screen were positioned towards the front of the room, set against an expansive printed fabric backdrop of blue sky and clouds and framed with the tops of the Skylanders’ stone wall castle. Ghost chairs and white organza ceiling swags added to the magic of the space. 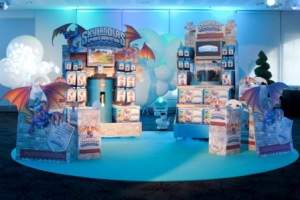 The centre of the room featured a round island of blue on which the world first interactive demonstration units were positioned to enable guests to visualize how the product would look in store truly bringing them to life.

“I was thoroughly impressed with Workshop Events,” commented Natasha Brack from Activision. “The venue was transformed into a magical world resonant of the ‘Skylanders’ ensuring that media and retail partners alike were left wowed,” she continued.