Advertisement
In an historic first, South Australia will host some of the world's top surfers this November after winning the rights to host an event on the surfing World Tour

In an historic first, South Australia will host some of the world’s top surfers this November after winning the rights to host an event on the surfing World Tour.

The inaugural Kangaroo Island Pro will be held at one of Australia’s most picturesque beaches, Vivonne Bay, from November 4 – 9, 2011. Former world champion Mark Occhilupo is already confirmed as a starter and he will be joined by up to 150 top male surfers from around the world.

The Kangaroo Island Pro will be the first time South Australia has hosted an ASP World Tour surfing competition – the highest rated surfing event SA can currently attract on the ASP World Tour. Presented by Sealink, the event is expected to inject about $2.5 million into the local economy in its first year. 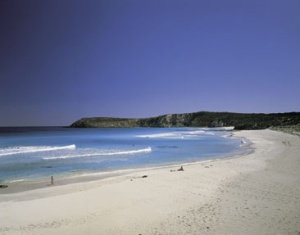 Tourism Minister John Rau said the event would showcase Kangaroo Island and South Australia to the world. “The Kangaroo Island Pro will provide a fantastic opportunity to promote Kangaroo Island as a wonderful surfing and tourism destination, and it will also bring a new market of tourists to this amazing island,” he said.

The six-star ASP World Tour surfing event will attract prize money of $US145,000, the highest amount possible in its first year. The Kangaroo Island Pro will be highly competitive with professional surfers outside of the top 32 participating in order to secure points to advance their rankings into the top group. Surfing Australia will look at building a festival around the Kangaroo Island Pro, with details to be launched at a later date. Camping facilities for about 5000 people will be available at the festival and Sealink will be offering packages to the event.

Competing with Mark Occhilupo at the event will be South Australia’s Dion Atkinson, who is the top ranked surfer in the State and placed 39th in the world and current South Australian State champion, Teale Vanner, who is from Kangaroo Island.

“Kangaroo Island is the perfect fit for this event, as it has vast amounts of unspoiled wilderness and wildlife and beautiful beaches that produce the surf required to hold a high ranking event,”  Rau said. “Visitors will be able to relax in the natural beauty of Kangaroo Island while watching some of the world’s best surfers compete.”