Advertisement
Tuesday marked the first day of summer and The Gold Coast Celebrated its status as 'the home of the Australian summer holiday' by saluting the season with an official welcome event.

Tuesday (1 Dec) marked the first day of summer and The Gold Coast celebrated its status as ‘the home of the Australian summer holiday’ by saluting the season with an official welcome event.

Indigenous and modern coast cultures met to announce to Australia that summer has arrived on the sun soaked shoreline of the Gold Coast. 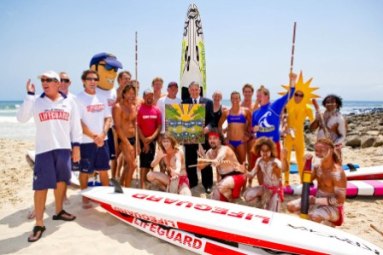 There they were met by dancers from the Yugerabah Kunjiel and Jaran dance troupe who performed a traditional seasonal welcome in front of a gathering of locals, tourists, school kids, Surf Lifesavers, Lifeguards, City Councillors and local dignitaries.

Central to the official welcome to summer was a traditional smoking ceremony to bless the land and all those associated with it. The two aboriginal clans performed the ancient smoking ceremony which includes a firelighting display and cleansing of the area through the use of smoking coconut husks. 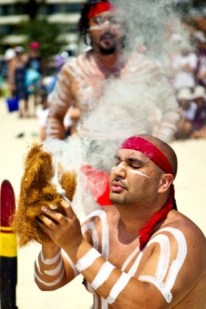 A traditional smoking ceremony was held to bless the land

Finally, Gold Coast Mayor Ron Clarke was presented with a canvas painting of traditional artwork titled ‘Summer fruits,’ by acclaimed local artist Narelle Urquart. The painting depicts the major natural assets of the region to embody the welcoming of the Australian summer and to symbolise the fun and safe times to be had along the whole of the Gold Coast this summer.

Mayor Ron Clarke said the Gold Coast was ready for the traditional summer holiday fun which the city is synonymous with.

“Almost every Australian has a Gold Coast holiday memory, for generations we have provided a welcoming, fun, exciting and unique place to enjoy good times with friends and family, and this summer the Gold Coast is bigger and better than ever,” he said.

It promises to be a positive summer holiday season for the Gold Coast as the city prepares to welcome an estimated 2.8 million visitors for a holiday, short break, weekend away or daytrip during December, January and February.

“It doesn’t get any better than heading down to one of the Gold Coast beaches, checking out the new rides at our theme parks, exploring our world heritage listed hinterland, or finding something new to see and do in the city which has more attractions than any other destination in the southern hemisphere.”

“Why would you choose to go anywhere other than the Gold Coast this summer?”