Advertisement
Sydney based Event Planet was recently engaged by Tabcorp to create a standout design for the Tabcorp 2012 Autumn Racing Carnival; Past the Post Marquee.

Sydney-based Event Planet was recently engaged by Tabcorp to create a standout design for the Tabcorp 2012 Autumn Racing Carnival; Past the Post Marquee. 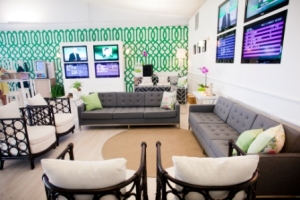 Inside the Tabcorp ‘Past the Post’ Marquee for 2012 Autumn Racing Carnival.

Following the brief, Event Planet immediately set to work. After inspecting the location, the team was inspired and came up with the idea to build a Hampton’s conservatory at a premium viewing location over the finishing line, Past the Post at Australian Turf Club, Sydney.

Including all the elements of the well-known charming Hamptons, Event Planet designed and built an area that oozed a relaxed atmosphere mixed with a touch of formality and sophistication. 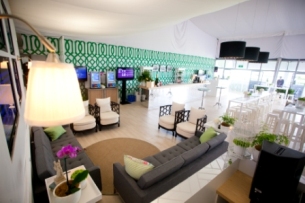 The bold green and white Trellis patterned walling was the feature of the space, proudly displaying beautiful framed racing images and wall lamps.

Clusters of ferns, orchids, florals and fragrant candles reflected from the feature geometric bar façade. Guests from around Australia enjoyed champagne whilst viewing the races from a prime trackside location on the custom-made viewing deck.

Any closer to the track, guests could have touched jockeys silks as the horses galloped past, but the winning ticket was the opportunity to listen in on all the racing secrets straight from Gai Waterhouse’s mouth.