Last Wednesday (28 March), Melbourne’s Shed 14 Central Pier came alive on a scale never before seen as By Design Event Group hosted an exhibit of splendour and imagination to more than 80 of Melbourne’s largest and most influential corporations, charity organisations and sporting clubs in Atlantic Group [v]’s four waterside event spaces. 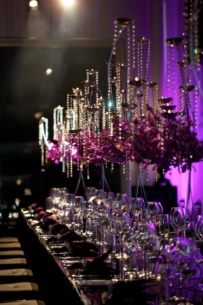 Fuelled by much more than a business relationship that began almost 13 years ago at South Wharf Atlantic, the By Design Group – Atlantic Group [v] collaboration is a perfect match and one which has led to success after success through a portfolio of event industry pioneering.

Since their conception in 1999, By Design Event Group have amazed and mesmerised the public across more than 2000 events and through an enduring kinship with Atlantic Group [v], By Design Event Group and some 320 guests were ready to celebrate and step outside the world they knew and embark on a sensorial journey into the unknown.

On arrival guests enjoyed a glass of sparkling served with a hibiscus flower and soaked up the atmosphere of a theatrical dinner setting, cleverly maximising the room’s ambience with black mirrored tops.

After moving into Sumac and basking in the cocktail room of By Design Event Group’s ornate drapery, guests continued to be in awe as they entered MAIÀ to view an array of varying table décor and meticulously designed centerpieces. 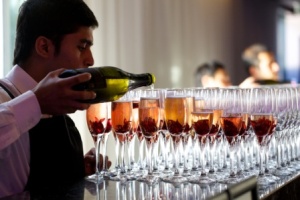 
The defining wonder of By Design Event Group’s imagination truly came alive in Peninsula when guests were immersed in a tribal Amazon where dancers perched above captivating them with their primal curiosity and intimate stares. As guests were thrilled, they enjoyed themed alligator burgers and sliders topped with guacamole and chipotle served on African masks and turmeric leaves. 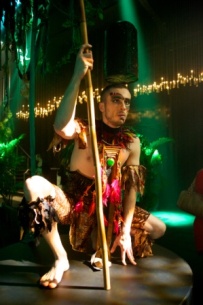 After a sequenced performance from each world which saw guests entertained by the likes of sultry cabaret performers and a suspended geisha with a long and draping kimono, the audience meandered their way through Peninsula, continuing to explore Atlantic Group’s matching culinary delights.

When it came for By Design Event Group managing director Marcus Favaloro to select a venue for their showcase, he sought not only a space but a trusting relationship and willingness to coming along for the ride.

“Time after time, we have seen our projects in the best of hands with Atlantic Group [v],” said Favaloro.

“Throughout the planning of this event we’ve had to re-visit our humble beginnings and Atlantic Group [v] has been there every step of the way so it feels very right for us to now celebrate our future together.”

“Basil and Marcus have a rare gift in bringing their vivid dreams into our world,” said Saleh.

“This corporate showcase was a forging of our expertise and creativity coming together that makes for something very special.”