The event was produced by Vision Services and Management  (VSM) — the same outfit behind next month’s Inside Film Awards. 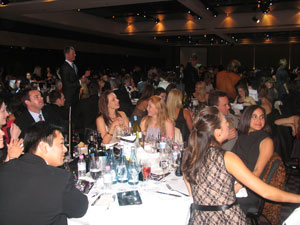 With a 1980s theme to celebrate the 25th anniversary of one of the host magazines, National Liquor News, industry members donned their best outfits for the event. Everything from Miami Vice gear to ‘80s formal dresses to old school cocktail-inspired costumes were among the crowd, with prizes for the best dressed given out on the night.

Months of voting across thousands of industry members right across the country led to the big announcements last night, which included the top gong of Supplier of the Year going to Foster’s Group.

Other awards covered the beer, wine and spirits segments, as well on-premise categories including Bar of the Year, which went to Seamstress in Melbourne.

Over a three-course meal, guests enjoyed breakdancing, flair bartending performances, a montage of old liquor TV commercials and a range of the latest beverage releases throughout the night.

It was one of the biggest ALIA nights in its 15-year history and it brought about some of the closest voting in years, which proved just how strong the competition has been over the past 12 months in the trade.