Advertisement
Cantabrians weren't just celebrating a much-needed Crusaders victory over the Cheetahs last Saturday, but the opening of a new temporary Christchurch Stadium that can hold up to 34,000 people.

Cantabrians weren’t just celebrating a much-needed Crusaders victory over the Cheetahs last Saturday, but the opening of a new temporary Christchurch Stadium that can hold up to 34,000 people. 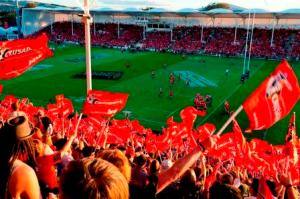 The Crusaders versus the Cheetahs at the new stadium

In a significant boost to the region, Christchurch Stadium, which was constructed in less than 100 days, will host Crusaders Super Rugby home matches for the remainder of the season, as well as an All Blacks match against Ireland on June 16.

The stadium, which is the first sporting venue to be built in the city since the February 2011 earthquake, can hold 18,000 for regular matches, 25,000 for international test matches and 34,000 for concerts. There are 13 corporate boxes at the ground, along with two merchandising and 20 food and beverage outlets. 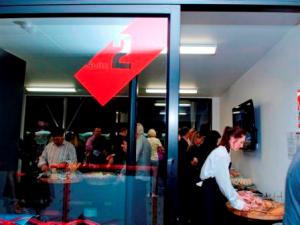 A corporate box at the new Christchurch Stadium

New Zealand’s Minister for Canterbury Earthquake Recovery, Gerry Brownlee, has welcomed the stadium’s opening and last Friday’s announcement (Mar 23) that the venue would be sponsored by insurer AMI.

“AMI’s sponsorship and continued backing of sport and entertainment in Christchurch is welcome, especially as the future of the quake damaged AMI Stadium remains in question,” he said.

Outlook: the new stadium can hold up to 34,000 for events

“Built in less than 100 days, the new AMI Stadium is a symbol of the city’s recovery and will be a great asset for Canterbury.

“It will deliver some normality for Cantabrians who have not been able to enjoy large sporting and entertainment fixtures for more than a year,” he said.

For the forseeable future, Christchurch Stadium will play host to Super Rugby and rugby league games, All Blacks test matches, cultural and community events and concerts.