Advertisement
The Cape Town International Convention Centre has announced the appointment of the design architects for the expansion project, which will see the centre doubling in capacity over the next three years

The Cape Town International Convention Centre (CTICC) has announced the appointment of the design architects for the expansion project, which will see the centre doubling in capacity over the next three years.

CTICC CEO Rashid Toefy announced that an award-winning Cape Town trio of architects -Piet Bakker of Stauch Voster Architects, Anya van der Merwe of Van der Merwe Miszewski Architects and Mokena Makeka of Makeka Design Lab – have been awarded the contract for the design of the new expansion of the convention centre.

“It is the goal of the CTICC to be the best long-haul international convention centre by 2020 and this exciting expansion project and the calibre of architects who have been appointed to lead the process, are essential to achieving this goal,” Toefy said. 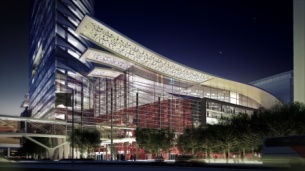 As a municipal entity majority owned by the City and Province, the appointment was made after a thorough open public tender process in line with the Municipal Finance Management Act (MFMA). An independent international and local advisory panel was convened to assist in the selection process and ensure the right team was chosen for this critical role.

“We are looking forward to the positive impact this project will have on the marketability of the Western Cape and South Africa as a year-round business and leisure destination,” said Toefy.

Toefy said the expansion was set to create an iconic convention centre within the redeveloped Foreshore precinct, which would comprise 10 000 square metres of retail space, a hospital, hotel and an office tower. It would also contribute to the regeneration of Founder’s Garden by the Province, which will connect the Artscape precinct with the new, larger CTICC.

The expansion is the final catalyst in the regeneration of the Foreshore as the business hub of the central city, and will go some way to helping Cape Town absorb some of its additional hotel bed capacity.

The extension will primarily add flexible multi-purpose exhibition space to the centre, in line with international trends. “The increased centre will not only create much needed capacity for larger events that we’ve not been able to accommodate to date, but it will also allow multiple large events to be hosted at the CTICC simultaneously. Both outcomes are in line with the needs of local and international meeting and event organisers.”

Toefy says the CTICC’s core mandate is to contribute to economic growth and job creation in the province through attracting international meetings and events to Cape Town and South Africa. Since opening its doors in 2003, the centre has contributed to the creation of more than 60,000 direct and indirect jobs and has played a pivotal role in raising the profile of Cape Town and the Western Cape as a leading, globally competitive meetings destination. The expansion is likely to increase the number of direct and indirect jobs created by the centre from about 7,000 to about over 10,000 per annum by 2018, Toefy said.

Highlighting the economic benefitsof a larger CTICC, Western Cape MEC for Economic Development and Tourism Alan Winde said: “As part owner of the CTICC, the Western Cape Government is delighted that it is to be expanded. The CTICC plays host to events such as the Cape Town Jazz Festival, Design Indaba and others – events that bring hordes of local and international tourists to Cape Town and the Western Cape. The expansion of the CTICC means that there is space for even more tourists. More tourists mean more economic growth and more opportunities for employment for the citizens of the Western Cape.”

Construction is expected to take place between 2013 and 2015.