Advertisement
Tiger Airways has inaugurated flights from its newest Australian base, Avalon, as the airline continues its rapid expansion.

Tiger Airways has inaugurated flights from its newest Australian base, Avalon, as the airline continues its rapid expansion. 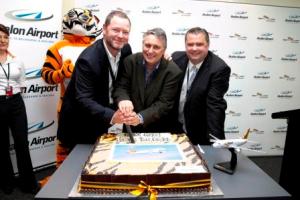 Avalon, 45 minutes from Melbourne’s CBD, is the third base for the low-cost carrier, alongside Melbourne Tullamarine and Adelaide, and initially up to nine new routes have been launched.

At the launch event on Tuesday, Rix used the opportunity to announce new flights from Avalon to Canberra and Brisbane alongside previously announced services from Avalon to Sydney, Gold Coast, Rockhampton, Mackay, Alice Springs and Perth.

“Our new base at Avalon Airport means more aircraft, more jobs, more low fares and further cements our commitment to the State of Victoria,” Rix said.

Prices on the new services to and from Avalon start from just $19.48 one-way.

“Tiger Airways’ budget airfares will encourage more Australians to see more of their own country and thanks to Tiger Airways, air travel has never been more affordable,” Rix said.