The group were greeted at Christchurch International Airport before being whisked inland by luxury coach, supplied by transportation specialists Johnstons Coachlines, to Terrace Downs Resort. Sited at the headwaters of the mighty Rakaia river Terrace Downs lies within close reach of a number of ski areas, including Mt Hutt, and features deluxe one-to-four bedroom accommodation, award-winning cuisine and high-tech conferencing facilities. Guests can chose from a range of resort-operated leisure and adventure activities, including jet-boating, horse-riding and archery. 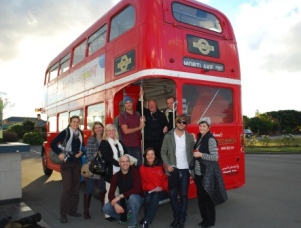 After touring the resort’s facilities the group were treated to an evening of fine dining featuring local game meats at the resort’s Hunters Restaurant before retiring to their luxurious accommodation for the night.

The next morning included a visit to the refurbished Methven Heritage Centre. The centre incorporates the original Mt Hutt Memorial Hall facilities and provides an attractive venue suitable for a variety of events. In addition to a large auditorium with seating for 400, the centre has a meeting room and a movie theatre. It also now boasts the New Zealand Alpine & Agriculture Encounter, an experiential visitor attraction using the latest in interactive technology and visual story-telling to take visitors on a journey from the mountains to plains, featuring snowsports, contemporary agriculture, geology and the weather.

The group travelled to the Mackenzie basin which stands 2500m above sea level. After lunch prepared by Astro Café high on top Mount John overlooking Lake Tekapo and Tekapo township they visited Mt John Observatory, where astronomers are conducting leading-edge research using a 1.8-metre telescope, New Zealand’s largest telescope and one of few in the world the public have access to.

Earth and Sky run tours through the observatory and thousands of star gazers visit annually because the Mackenzie District is renowned for the clarity of its sky which allows people to see the southern stars and transient phenomena such as aurorae, meteor showers and the zodiacal light in all their pristine glory.

The view from Mt John also gives a stunning vista below of the plains where scenes from The Hobbit new movie were filmed.

The group then checked into the Peppers Bluewater Resort Lake Tekapo for the night.  They had time for a quick dip at Tekapo Springs, a new facility that brings together year round hot pools and health spa services, as well as ice sports in the winter, before travelling to Air Safaris for a planned aerial tour of the region.

Next, the group toured the Mackenzie Country Inn, a country hotel which boasts 80 standard rooms and 28 deluxe rooms, all of which feature their own private balconies with expansive garden and mountain views. They then moved onto the Twizel Events Centre, which boasts a professional conference room,  full size sports hall, 220-seat theatre and New Zealand’s ultimate rock climbing walls.

Sited just down the road is the South Island’s premier rowing lake and for those looking for team-building opportunities you can go rowing with some of New Zealand’s top rowers and coxswains to steer you.

That night the group journeyed to New Zealand’s highest peak and their accommodation for the night – the Hermitage Hotel Mount Cook. Nestled amongst stunning scenery, the world-renowned 212-room Hermitage Hotel and adjacent Sir Edmund Hillary Alpine Centre offers the complete alpine retreat experience. There is a range of accommodation as well as several restaurants and bars offering casual through to fine dining.

The Sir Edmund Hillary Alpine Centre’s 126-seat custom-designed theatre is the world’s only theatre with 2D, 3D and world-class Digital Dome Planetarium, contained within the same space. In the foyer of the theatre the group discovered a museum showcasing the history of the Mount Cook region through transport, climbing, The Hermitage Hotel and pioneer extraordinaire, Sir Edmund Hillary himself. 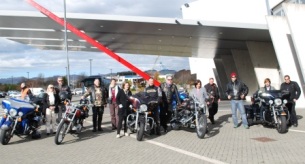 After a night at lofty heights the group travelled by coach to Ashburton where the last hour of their journey to Christchurch would be made on the back of a Harley Davidson.

Invigorated after the ride they arrived at Christchurch’s CBS Arena for a site inspection before moving onto Air Force Museum to check out the conferencing and function facilities there.

Hassle-free Tours then took the group on an open top double decker bus tour of Christchurch, where they got to learn about Christchurch’s fascinating history from the pioneering days through to modern day times and discover how Christchurch is recovering from the devastating February 22 earthquake which has now become a major event in New Zealand’s history.

That night the group got a flavour of Christchurch’s new pop-up shipping container shopping mall while enjoying an onsite dinner catered by Continental Catering and themed by designer Patricia Proctor. Before sitting down to dine they were treated to a traditional Maori welcome from Dave Brennan and the team behind the Kotane Maori Experience.

After a night at Christchurch’s luxury boutique hotel, The Classic Villa the group bade a reluctant farewell to Canterbury.