Advertisement
QantasLink is set to deploy its upgraded Boeing 717 jets with Business Class and in-flight entertainment on all flights between Hobart and mainland Australia.

QantasLink is set to deploy its upgraded Boeing 717 jets with Business Class and in-flight entertainment on all flights between Hobart and mainland Australia. 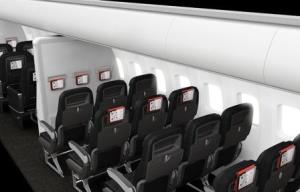 The upgraded 110-seat jets will be used on Hobart – Sydney and Hobart – Melbourne flights from mid-2014.

“These jets will have market-leading seats, premium food and drinks and exceptional on board service,” Gissing said.

“We will also be providing individual iPads for in-flight entertainment for all customers – in both Business and Economy.

“The continued investment in our fleet shows the commitment and confidence that we have in the Australian domestic market and in particular to Tasmania.”

“This will mean all flights from Sydney and Melbourne to Hobart will be using jet aircraft that will be based in Hobart.”

Qantas’ Boeing 737 and QantasLink’s Q400 aircraft currently operating into Hobart will be redeployed to other parts of the domestic network.

QantasLink is upgrading five B717s which will be introduced to the domestic fleet during FY14, initially on flights from Canberra.  Qantas Domestic’s 13 other B717s are also being upgraded with new interiors in an all-economy configuration.