Advertisement
Garuda Indonesia has announced 18 new services will be added to its network during 2009, including Adelaide-Denpasar in a major boost for a route that recently saw flights commenced by Pacific Blue.

Garuda Indonesia has announced 18 new services will be added to its network this year, including Adelaide-Denpasar in a major boost for a route that recently saw flights commenced by Pacific Blue. 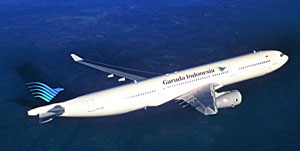 The news of the new route – for which a starting date has yet to be announced – comes as Garuda Indonesia celebrates 60 years of flying with special $60 airfares to mark the occasion.

When a return airfare to Bali is purchased, a second ticket can be bought for just $60 plus taxes. Airfares start from $415 ex-Darwin, $549 ex-Perth and $779 ex-Sydney or Melbourne (plus taxes).

“This is our diamond anniversary and we want to celebrate,” said Garuda Indonesia senior general manager – Australia and Southwest Pacific, Poerwoko Soeparyono.

“We are the only full service airline flying direct to Bali so all our fares include free drinks, free meals, free entertainment, free luggage allowance and a complimentary blanket and pillow on board.”

Travel is available over a range of dates from Feb 2 until Nov 15 from Darwin; and until Dec 4 from other ports, but passengers must book and pay before Feb 28.

Garuda is expanding as it takes delivery of new generation aircraft to replace older models. Currently, the airline has 50 Boeing 737-NGs and 10 Boeing 777-300ERs on order and by 2013 will have 128 aircraft in the fleet.