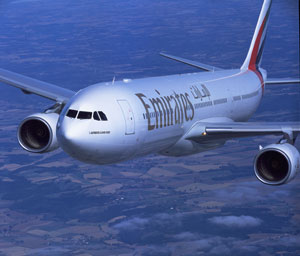 The new 6am departure from Sydney gets into Dubai 1:30pm, meaning passengers can connect through to afternoon European lights and arrive in cities such as Milan and London in time for dinner.

“The launch of the third Sydney service reflects our continued commitment to Australia,” he said.

The launch of the new services also takes the airline’s capacity in Australia to 70 flights per week, up from 49 at the start of 2009.

“We announced our intention to increase capacity this year and we have stuck to that promise,” Pearse said.

“In February we added a third daily service for Melbourne and a second daily service to Brisbane (and) these additional services, combined with our new interline agreement with Virgin Blue, means better connections for all Australians travelling to Dubai, and beyond.

“Whilst it has been an unpredictable year, we are seeing positive signs of a recovery and with the launch of the new Sydney service we are well placed to take advantage of the increased demand for overseas travel,” he said

December 2 will mark the start of several big days for the airline, with his Highness Sheikh Ahmed Bin Saeed Al-Maktoum, Chairman and Chief Executive of Emirates Airline and Group, flying to Australia to attend the official opening of Wolgan Valley Resort and Spa in the Blue Mountains the day after.