Advertisement
Emirates has inaugurated flights to Dublin in a significant boost to tourism between Australia and Ireland.

Emirates has inaugurated flights to Dublin in a significant boost to tourism between Australia and Ireland. 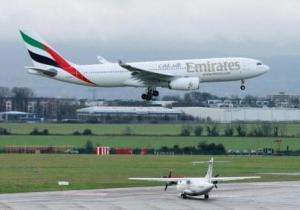 The new one-stop flights via Dubai will mean passengers between the two countries can avoid traditional hubs like Heathrow, speeding up travel times in each direction.

This launch is a tremendous development for both Irish business and Irish tourism,” said Emirates’ President Tim Clark. “We are now connecting Ireland not only to Dubai, but also to over 100 destinations throughout the world. Solid early bookings have demonstrated that the demand is there, opening up new markets for passengers and cargo to and from the Republic.

In a sign of the expected demand on the service from down under, Emirates’ inaugural flight from Dubai to Dublin had more than 70 passengers who had booked tickets from Australia out of 237 onboard the Airbus A330-200.

Ireland’s Minister for Transport, Tourism and Sport, Leo Varadkar, who was on the inaugural service, said he had high expectations of a significant inbound tourism increase as a result of Emirates’ new flights.

“It also considerably improves connectivity with India, Australia and New Zealand, which should result in a further increase in tourism numbers from these countries,” Varadkar said.

Emirates operates 70 flights per week from Australia, many of which will connect to the new Dublin service.