Advertisement
Emirates has commenced Airbus A380 services from Dubai to Sydney and Auckland, becoming the third airline to fly the superjumbo to the Harbour city.

Emirates has commenced Airbus A380 services from Dubai to Sydney and Auckland, becoming the third airline to fly  the superjumbo to the Harbour city. 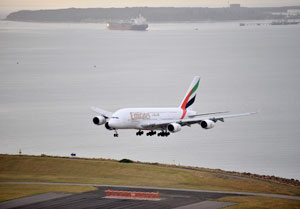 The Emirates A380 lands in Sydney for the first time

“The start of A380 services on this route represents yet another initiative in Emirates’ partnership with Australia and New Zealand,” said Emirates’ senior vice-president for commercial operations – East Asia and Australasia, Richard Vaughan.

“Emirates is not only committing to offer a revolutionary in-flight experience to travellers from these countries but is also enhancing capacity on the route – a welcome news to tourism authorities of both countries as they seek to attract increasing number of visitors from the Middle East,” he said.

The first A380 flight from Dubai touched down in Sydney yesterday (Feb 2) and flew onwards to Auckland, marking the first time an Airbus A380 has operated commercially to New Zealand.

Emirates will initially operate the Dubai-Sydney-Auckland route with the A380 three times per week (Monday, Thursday and Saturday) before the service progresses to a daily flight from May 1, 2009.

Like rivals Qantas and Singapore Airlines, Emirates also operates the A380 to London Heathrow and the extra seating capacity on the Kangaroo Route is expected to significantly increase inbound arrivals from the UK once the service goes daily.