Advertisement
The Dorsett will be among a group of hotels on the coast with more than 300 rooms and be the second biggest in the Broadbeach region behind only The Star Grand. 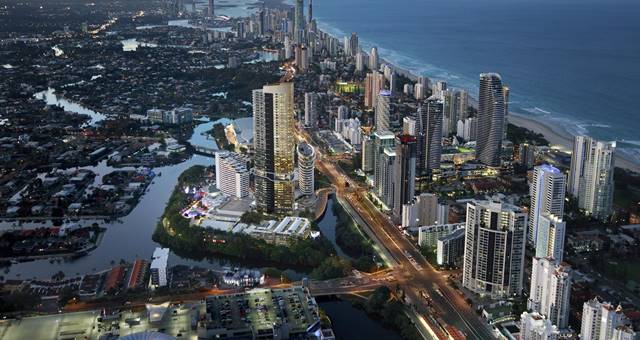 A 53-storey mixed use tower set to house the new Dorsett hotel has broken ground in a sod turning ceremony on Broadbeach Island this week.

The $400m development, which is set to create 2,300 jobs, marks the entry of the Dorsett hotel brand to Australia.

The Dorsett will be among a group of hotels on the coast with more than 300 rooms and be the second biggest in the Broadbeach region behind only The Star Grand.

The tower will deliver The Star Gold Coast a third hotel – alongside The Star Grand and The Darling – boasting 316 rooms.

The tower will also include apartment accommodation, with 423 one and two-bedroom options taking the overall supply at The Star Gold Coast complex to almost 1400 rooms.

Exciting new restaurant and bar concepts are also planned, together with a recreation deck with ocean views and a resort pool for hotel guests.

“We are delighted to further enhance the tourism appeal of the Gold Coast and south-east Queensland more generally with this latest joint venture development,” said Mr O’Neill.

“Together with our partners we have, in progress or planning, projects that will see our investment across Brisbane and the Gold Coast exceed $4.5 billion.

“This latest commitment showcases the confidence we have in the future of the coast and its potential to become an even more established primary location for intrastate, interstate and international visitors.

“The Star Gold Coast has been transformed over the past three years, and continues to evolve, with levels of investment that position us as a genuine global tourism destination.

“The introduction of a Dorsett hotel will bring with it increased awareness in the global market, especially in Asia, where Dorsett Hospitality International owns and operates the majority of its 54 hotels.

“When the Dorsett opens for business around early 2022, it will ensure we have two of the largest hotels on the Gold Coast – plus the most luxurious in The Darling suite hotel.

“Overall, we will have the finest resort amenities, additional food and beverage venues to complement the award-winning restaurants and bars already opened, and entertainment offerings that include leading Australian and international acts at The Star Gold Coast theatre.”

The 316 hotel rooms will feature across the tower’s lower levels, while an additional 423 residential apartments ranging from 54sqm to 109sqm will form the upper levels.