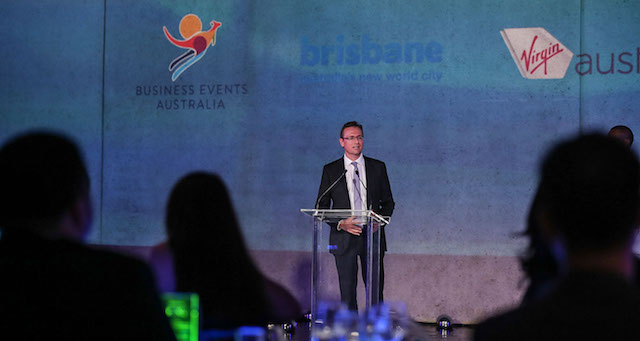 At the closing night dinner held at Queensland Art Gallery’s Watermall, O’Sullivan said, “From a tourism and infrastructure perspective there is no better story going at the moment than here in Brisbane.

“A new second runway and a fantastic airport, 1200 rooms coming online at Queens Wharf, Howard Smith Wharves, plus many of the other experiences that you have had the opportunity to sample. Brisbane has a great story and that’s why we wanted to bring you all here over the last two days so you could see exactly what has been happening in South-East Queensland.

“For the remaining days that you have here, you will see some amazing experiences from around the country in places like Tropical North Queensland, the Sunshine Coast as well as New South Wales, Victoria and other parts of our country and we hope you will have an equally hospitable and enjoyable time as well.

“These events don’t happen by accident and I would like to acknowledge our partners that have been working with us to deliver this over the last 18 months when we awarded the hosting rights to Brisbane – in particular the team from Brisbane Marketing led by Brett Fraser and Rob Nelson who have done a fantastic job to bring this to life, our airline partners Virgin Australia, Singapore Airlines and Etihad Airways and our great partners at Tourism and Events Queensland who we work with on so many different levels to show Australia to the rest of the world and not just through the important area of business events, but also to consumers as well. And to the team at Business Events Australia, so ably led by Penny Lion and her team, Kelly, Monica and Yvonne – day in and day out. But most importantly, to the 97 of you that have come around the world, we say thanks very much.”