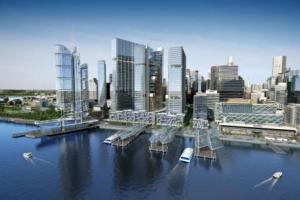 The Barangaroo South plan includes an iconic 250-room upper-upscale hotel to be built on a pier over the water in Darling Harbour and is part of a development that will be “an extraordinary opportunity for Sydney to demonstrate global leadership in regeneration and sustainable development,” according to Lend Lease’s Group Head of Development David Hutton.

“The hotel plays a critical part in creating a fresh, exciting and welcoming destination,” he said.

The hotel will be the second upper-upscale hotel – after ‘Hotel Switch’ at Star City – to be built in Sydney after The Westin, which opened prior to the 2000 Olympic Games.

Hutton said that interest in the hotel has continued to grow in recent months amongst hotel operators and investors.

“Interest is very strong in this exciting aspect of the development, with discussions or expressions of interest from all of the leading international hotel groups,” he said.

“Operators and potential investors appear to really appreciate the role the hotel will play in establishing Barangaroo as a key part of the city and the opportunity to create a new icon for 21st Century Sydney.

“We plan to start detailed discussions with potential operators in the coming months and will evolve the hotel design and concept during 2011,” Hutton said.

Thursday’s (Dec 16) announcement by the Minister for Planning follows months of public consultation, which led to a number of refinements to the design of the entire 22-hectare project, due for final completion in 2025.