Advertisement
The Sofitel Gold Coast Broadbeach partnered with 19 KAREN Contemporary Artspace for the art exhibition 'The Art of Cirque du Soleil' which opened with a bang on Friday 31 May 2013.

The Sofitel Gold Coast Broadbeach partnered with 19 KAREN Contemporary Artspace for the art exhibition ‘The Art of Cirque du Soleil’ which opened with a bang on Friday 31 May 2013. 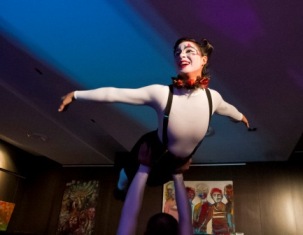 After partnering with the Sofitel Gold Coast Broadbeach late last year, 19 KAREN was asked to put together and arts program for the hotel and to include a group show.

“I was briefed by the Sofitel Gold Coasts’ general manager Amery Burleigh about the philosophy of the hotel and its connection with the arts and the desire to create a good story with good art. After seeing two Cirque du Soleil shows during a recent trip to America I knew instantly what the new group show should be titled. The Art of Cirque du Soleil has all the makings of a successful group show: colour, dance, music, fashion and movement,” said 19 KAREN director, Terri Lew.

Each of the participating artists were given the task of choosing from any of the 20 Cirque du Soleil shows and creating two works each. The work speaks for itself proving imagination has no boundaries. 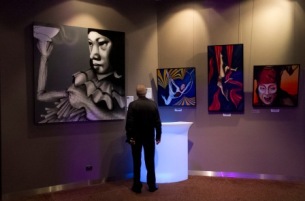 The exhibitions is a collaborative venture between the hotel and contemporary art apce, 19 KAREN.

Gold Coast artist Anne Smerdon was excited to explore the show Alegria through the costumes as her subject for the group show.

“My two works contrast the “old generation” of the traditional ‘ringmaster’ costume with the “new generation” of Cirque du Soleil’s costume masterpieces of looser, more expressive and symbolic attire. To really capture the intricacies and volumes of these costumes stitching in hand detail was needed,” said Smerdon. 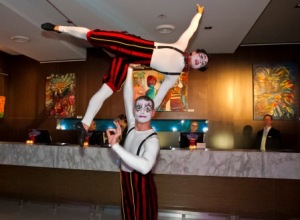 The event included the artists, musician Joe Jeremiah and roving performers from CircaNICA.