Advertisement
When more than 50 Olympians returned from London, arriving in Sydney to take part in the Olympic Parade and a host of official functions, the Olympic team enjoyed a break at the Sydney Novotel on Darlign Harbour

When more than 50 Olympians returned from London, arriving in Sydney to take part in the Olympic Parade and a host of official functions including dinner with the Prime Minister at Customs House, the Olympic team enjoyed their break at the Sydney Novotel on Darling Harbour with staff going out of their way to make their heroes welcome. 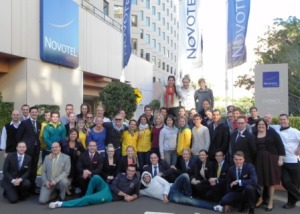 The Novotel’s Gavin Loveday, who was in charge of ensuring the athletes had a smooth visit, said the team were very accommodating with in-house guests who wanted photos and autographs. He had made sure the gym and pool were ready to be put into over-drive but was surprised to find instead that most of the athletes were intent on relaxing after their months of grueling training.

General manager Lorraine Mercuri asked Chef to create special green and gold macaroons as a welcome gift for the athletes and staff formed an honour guard when the Olympians left, with the team now headed on a national tour, staying at Accor hotels in Melbourne, Adelaide, Brisbane, Hobart, Perth and Canberra.

As sponsors of the Australian Olympic Committee, Accor also hosted the Olympians at the new Pullman St Pancras after their time at the Athletes Village in London, and will continue to provide accommodation for Australia’s Olympians as they prepare for Rio 2016.

Novotel is also a sponsor of the Australian Swimming Team and is the preferred accommodation partner for all the swimming team’s accommodation needs so it is not unusual to see the Olympic heroes inhouse.