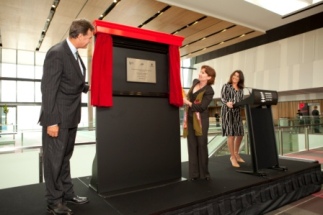 The Minister opened the five level, $140m boutique expansion of the Brisbane Convention & Exhibition Centre (BCEC) during the annual Australia Day celebrations at the Centre. The date for the official opening has a special significance – being the same day as the Centre reopened for business last year following the January floods.

Premier Bligh said the opening of the newly expanded venue was further confirmation of Brisbane’s spirited determination to recover and rebuild.

With its first events commencing in mid February, BCEC on Grey Street is already holding bookings for 292 events and has confirmed conventions to date which will generate in excess of $70M in economic benefit to Brisbane and Queensland.

With the completion of the 25,000 square metre development, Brisbane Convention & Exhibition Centre is now equal in size to Australia’s largest convention venue and based on enquires is forecasting a minimum additional 300 events on top of the 1,000 events it hosts annually.

The expansion of the Centre’s facilities to a total of 44 meeting rooms including three stand alone tiered auditoria and some of Brisbane’s most outstanding function venues, BCEC is now Australia’s most flexible meetings and events venue.

The operation of the new venue will deliver employment for 100 additional full time equivalent employees. 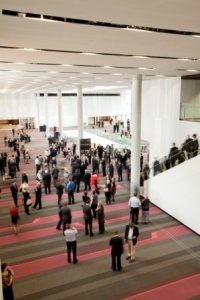 BCEC on Grey Street has been designed to meet an increasing market demand for smaller and medium sized events providing the Centre with unprecedented flexibility to host events from 8 to 8,000 guests.

BCEC has been profitable every year since opening in 1995 and during the last financial year recorded its highest ever revenue in its 16 year history while also delivering an economic benefit to Queensland during that year of $217 million.

BCEC general manager, Bob O’Keeffe said the Centre will build on its previous record of achievement with BCEC on Grey Street the key driver to the Centre’s continued outstanding performance.

“The addition of Grey Street to the Centre’s existing resources generates a robust dynamic into the ultra competitive global market mix. The boutique nature of Grey Street is proving attractive to international and national meeting planners, with bookings exceeding targets.”

Harvey Lister, Chairman and CEO of AEG Ogden, operators of the Brisbane Convention & Exhibition Centre said the launch of BCEC on Grey Street would consolidate and provide a stimulus for Queensland’s business events industry.

“I have every confidence that this will strengthen both the Centre’s and Brisbane’s leadership position in a very competitive marketplace resulting in new business development opportunities. AEG Ogden is very proud to manage and operate Brisbane Convention & Exhibition Centre, Australia’s most awarded convention venue.”