This remarkable achievement is a clear indication of the uncompromised consistency and quality of the Centre’s Food & Beverage product and creates a trio of major accolades for BCEC’s recent culinary accomplishments. 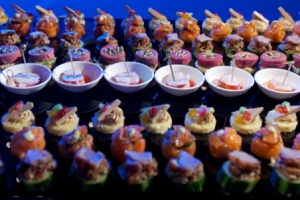 Centre senior sous chef Russell Clarke and apprentice chef, Mathew Lee have been selected to represent Australia at the 2011 Bocuse d’Or International Cooking Competition – widely acknowledged as the culinary equivalent of the Olympic Games – in Lyon in France next January, while the Centre was voted the world’s best caterer in the prestigious international survey of convention centres conducted by the authoritative Association Internationale des Palais de Congres.

This latest award brings the Centre’s total tally for catering awards to an impressive 50.

Convention Centre general manager, Bob O’Keeffe said the latest achievement was testimony to the passion and dedication of the Centre’s team of talented Chefs. “The quality and standards of the Centre’s Food & Beverage product has been a significant factor in the Centre maintaining its leadership position in what is a very competitive marketplace,” he said.

The Centre will now take its place in Melbourne in October to contest the National Restaurant & Catering Awards.