Advertisement
The EEAA has announced overnight the 2017 finalists of its premier annual Awards for Excellence. 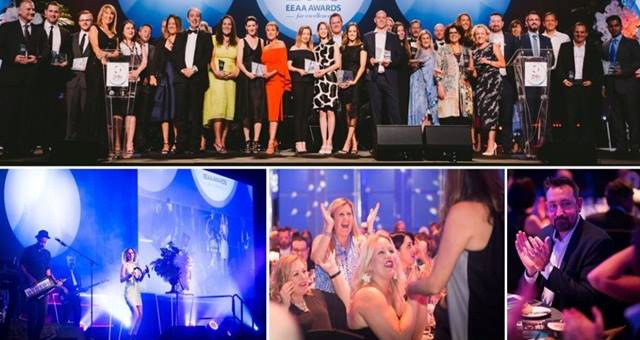 Winners and guests at the EEAA 2016 Awards for Excellence.

The EEAA has announced overnight the 2017 finalists of its premier annual Awards for Excellence.

Following a competitive assessment process, finalists in 14 categories have been decided by an esteemed panel of 39 international and national judges. Nominees for the Richard Geddes Young Achiever Award have also been released.

EEAA Chief Executive, Joyce DiMascio, acknowledged the high calibre of entries and commended the finalists on their achievements.

“This is a distinguished shortlist that has met high standards of excellence as decided by some of the most reputable global and national leaders of our industry,” Ms DiMascio said.

“The judging has been tight and very competitive across a number of categories. The calibre of the entries is testament to the talent of the exhibition and event sector in Australasia.

“I thank the judges for their time and expertise throughout this process and Chair of Judges, John Trevillian AM, for his expert oversight.

“And, I congratulate all of the finalists and nominees for their achievements so far and wish them all the very best for the final awards presentation in Melbourne on 29 November at Melbourne Museum.”

Winners in the show categories will undergo a second round of judging to determine the coveted Best Show winner for 2017. All winners, including the inaugural Unsung Hero, will be announced at a gala dinner in Melbourne on Wednesday, 29 November 2017.

We congratulate the finalists in the EEAA 2017 Awards for Excellence and look forward to seeing you in Melbourne on Wednesday, 29 November 2017:

UNSUNG HERO
To be announced at the awards ceremony