Advertisement
Brisbane Convention & Exhibition Centre welcomed 1200 of the world's most eminent cancer specialists last week, to talk about the elimination of cancer as a life threatening disease for future generations.

Brisbane Convention & Exhibition Centre (BCEC) welcomed 1200 of the world’s most eminent cancer specialists last week, to talk about the elimination of cancer as a life threatening disease for future generations. 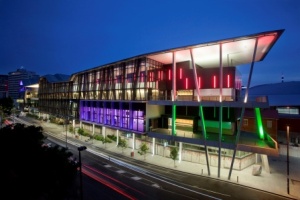 More than 1200 delegates converged on the Brisbane Convention & Exhibition Centre for the conference.

The Conference with its program theme Impact through translation: Cancer Research Informing Practice has the overarching goal of ensuring that cancer patients around the world receive the best possible care.

Cancer Council Queensland CEO Professor Jeff Dunn said the conference is an important event for global cancer control and will have outcomes and legacies that will benefit the broader health community and cancer patients worldwide.

“The IPOS World Congress and COSA’s Annual Scientific Meeting have brought together the world’s experts to discuss all aspects of cancer from prevention and awareness to treatment and recovery,” Professor Dunn said.

The Congress delivered a special focus on the psychosocial aspects of cancer care and quality of life, recognising that many patients experience clinically significant distress directly related to their cancer diagnosis.

IPOS is currently leading a global movement to have distress recognised as the Sixth Vital Sign in cancer care.

BCEC Convention Advocate Professor Dunn was instrumental in helping secure the IPOS 14th World Congress and COSA’s 39th Annual Scientific Meeting for Brisbane in partnership with the BCEC team and with support from Brisbane Marketing.

BCEC’s general manager, Bob O’Keeffe said this Congress was one of 23 international conventions hosted by the Centre during 2012 generating $61 million in economic benefit to Brisbane and Queensland. “The Centre continues to be a strong player in the international scientific meetings space resulting in significant economic, social and scientific benefits for Brisbane.