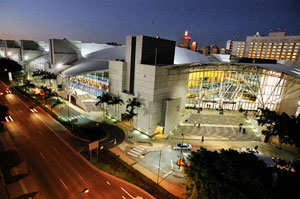 Brisbane has been selected to host major green events

Green Cities ’09, to be held in March this year, is Asia Pacific’s biggest event focusing on sustainability for the proprty and building industry. It is jointly hosted by the Property Council of Australia and Green Building Council Australia.

Over 1,500 delegates from across the region are expected to attend the four-day event to attend presentations from a panel of key national and international speakers — all experts in their field.

In addition, Brisbane expects another 2,000 delegates from the global green roofs industry and food and energy industries to attend the annual World Green Infrastructure Congress in October 2012 . The four-day conference will focus on urban greenery and will include a strong delegation from Europe, North America and Asia.

One of the conferences’ primary objevtives is to shift the perception of green roofs from quirky to mainstream by demonstrating relevant examples, to be experienced first-hand by delegates with the proximity of the South Bank Car Park, one of Brisbane’s most public green roofs.

In addition, the centre’s planned development  on Grey Street will incorporate a number of green initiatives and operate under a 5-star environmental rating — yet another plus for Brisbane as a preferred meetings destination.

BCEC general manager, Robert O’Keeffe, said the Green Cities and World Green Infrastructure events are consistent with the Centre’s strong environmental credentials, which include recognition by Green Globe Worldwide. “Green awareness is an embedded business process and sustainability is at the very core of the way we conduct our operations,” he said.

O’Keeffe added that the events would highlight the importance of sustainability to society and to our industry in addition to demonstrating Brisbane’s attraction as a leading destination for major meetings and events. “The fact that we are now winning these ‘green’ events is a significant endorsement of the Centre’s initiatives and ongoing commitment to sustainable business practices,” he said.

“Green Cities and the World Green Infrastructure Congress are perfect examples of the way the world is heading and Brisbane Marketing is thrilled to have helped secure these important events for the city,” she said.