Advertisement
To celebrate the airline's 75th anniversary, South African Airways has released a range of special airfares to Africa and Europe.

To celebrate the airline’s 75th anniversary, South African Airways has released a range of special airfares to Africa and Europe. 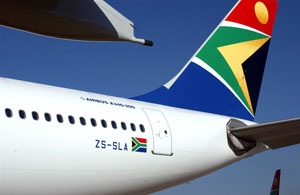 South African Airways’ head of Australasia, Thevan Krishna, said the airfares start at $1475 and $1575 from Perth and Sydney to Johannesburg respectively.

“We are celebrating 75 years continuous flying next year, and Australia has played a big part in our growth and development as Africa’s leading airline,” Thevan said. “We are continuing to see strong passenger traffic on the Wallaby route with increasing focus on Africa as a recreational tourist, VFR and business destination.

From Adelaide, Brisbane and Melbourne to Johannesburg fare is $1675 and for an additional $200, passengers from all cities can fly to Durban, Cape Town, East London or Port Elizabeth return, with other African ports available on request.