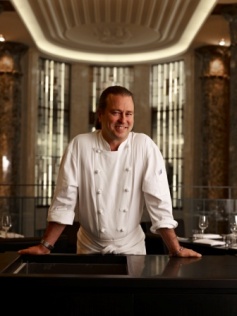 Perry was joined by local chefs Guillaume Brahimi (Guillaume at Bennelong), Peter Gilmore (Quay) and Tetsuya Wakuda (Tetsuya’s) together with international stars, Heston Blumenthal (Fat Duck UK) and Thomas Keller (Per Se and French Laundry, USA). Each chef cooked a course for the 140 guests in attendance.

The superb menu featured a wide array of signature dishes from each chef and each course was complemented by many of Australia’s finest and iconic wines including Grosset Riesling, Giaconda Chardonnay, Penfolds 707 and Henschke Hill of Grace.

Perry was thrilled with the final result and expressed his support of the Starlight Children’s Foundation.

“We are all extremely passionate about the work we do for charity and the valuable money we are able to raise for the kids and their families. It’s simply a bonus that Heston, Thomas, Tetsuya, Guillaume, Peter and I absolutely love coming together for this incredible event,” said Perry.