Advertisement
Sydney foodies have swooned over the latest pop-up venue to hit the CBD when the MasterChef Dining pop-up opened near Saint Mary's Cathedral.

Sydney foodies have swooned over the latest pop-up venue to hit the CBD when the MasterChef Dining pop-up opened near Saint Mary’s Cathedral.

Working with Shine Australia, creative brand activation experts, the projects* worked to bring the MasterChef brand to life with the design and execution of the first MasterChef Dining pop-up bar and restaurant, set to be the must-have table booking in Sydney. 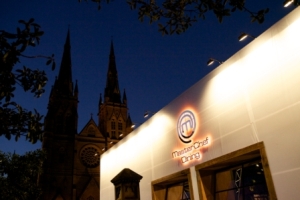 The pop-up restaurant and bar is located just outside Saint Mary’s Catherdral in Sydney’s CBD.

The concept brings the series to life physically, the final result is a translation of the on-screen show into an exquisite fine dining experience.

Having delivered engaging brand activations such as summer’s coolest venue in the form of ABSOLUT Bondi, Australia’s Biggest Runway Show for Westfield and EA’s Need for Speed Hot Pursuit that combined a car show with a music concert starring Big Boi (Outkast), the projects* needed to think big for the hit TV show MasterChef and Network Ten.

The MasterChef Dining pop-up restaurant and bar’s positioning in the forecourt of St Mary’s Cathedral in Sydney’s CBD utilises the large open space ideal for such a concept, with views across Hyde Park to the city beyond. Guests will be treated to a 3-course culinary feast prepared by an array of past and present stars of the show. Winners Julie Goodwin, Justine Schofield, Adam Liaw and Hayden Quinn will take part in the rotating roster of chefs, working alongside some of the country’s most respected chefs including Justin North, Kylie Kwong, and Christine Mansfield. 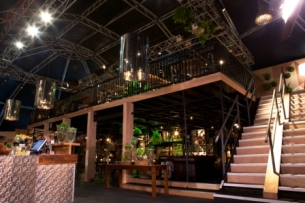 Within the pop-up is a  stand alone bar operated by the Keystone Group.

Working in collaboration with designer Kevin Ho, Butler’s Hire were engaged to create a unique straucture for this exclusive event.

“This concept takes ‘pop up’ dining to a new level, MasterChef Dining will be Australia’s first premium fine dining pop up restaurant bringing the much loved MasterChef brand to life. Consumers will be immersed in the MasterChef brand from the delicious show inspired menu, to meeting their favourite contestants and chefs and the look and feel of the innovative structure” says Carrie Barker, one of the partners of the projects*.

Specialising in brand experiences the projects* was founded in 2009 by Jack Bedwani, formerly of SPIN Communications where he produced fashion shows and live events internationally and Simon Philby, a former creative director at ACP Magazines. They were soon joined by Barker, previously CEO of Emap Australia and quickly established a reputation for creative experiential campaigns that engage consumers and bring brands to life.

“Creative collaboration is a huge part of our recipe for our success as an agency, we use our network of contacts to bring the best people to the table and to bring our ideas to life. For MasterChef Dining, we’re collaborating with Kelvin Ho on the design of the outdoor structure and Alex Zabotto Bentley on the interior styling to really add that special touch. 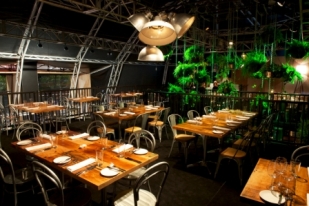 Inside, the restaurant will feature 3 course meals created by their favourite show contestants and some of Australia’s leading chefs.

The menu, meanwhile, is a collaboration with the Keystone Group and the many MasterChef favourites and chefs taking part in this fantastic project,” said Bedwani.

As the design minds behind the creation of a giant android that took pride of placement in Circular Quay to launch Vodafone’s new handset and Australia’s largest custom-built digital projection mapping sequence to launch the all new Audi A6, the agency is being sought after for left-of-field creative thinking.

They were also the creators of the now infamous ‘10 Summer Sundays in an ABSOLUT world” events that took place on the rooftop of the Swiss Grand Hotel in Bondi Beach and saw 20,000 guests flock beachside. Establishing the redesigned Westfield website, they devised and delivered ‘Westfield Style Stream’ the worlds first consumer generated live-stream runway show, streamed over 3 days and showcasing 100 brands in partnership with uber-stylist Rachel Zoe.

In this world first, consumers were able to select models, outfits and accessories online that watch them appear live on the runway within minutes.

Given Australia’s love affair with food has shown no signs of slowing, the projects* team know an ideal time for the most successful food program on television to make the leap off the screen.