Advertisement
The Australian Event Awards on Wednesday 13 September on the Sunshine Coast was a night to remember for many. Click here to find out who took out the top prizes. 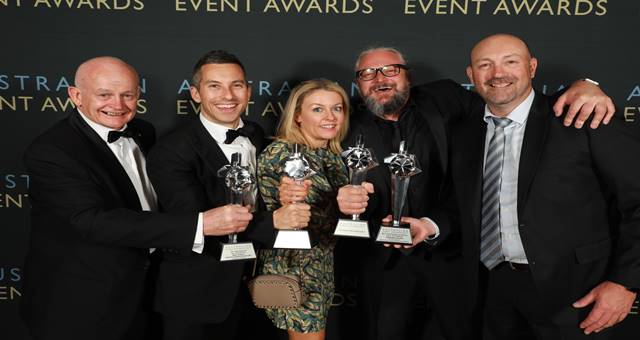 Recognising the best Australian events and achievements by Australians in the global events industry, the Australian Event Awards on Wednesday 13 September on the Sunshine Coast also delivered a night to remember by indulging in the art of the unexpected.

New South Wales took out the State or Territory Award recognising the best region in Australia for events.

Major event director and current Creative Director for Vivid Sydney Ignatius Jones, received the Lifetime Achievement Award for 2017 and encouraged the industry as a whole to continue to aim for new heights.

Working with the theme “the art of the unexpected”, the Awards Ceremony kicked off with a fake opening, introducing a timid MC who had lost several pages of her script on a very modest stage before a curtain dropped to reveal the real, significantly more impressive stage and the actor, producer, director and radio announcer Cameron Daddo was introduced as the true MC for the night.

Other highlights of the night included Maske, an electric string trio who opened the show, the head-turning Spinning Aerial Moon, the Undercover Tenors who popped out of the unsuspecting attendees, a well-received La La Land prank and a crowd pleasing closing set from the Antipodean Rock’N’Roll Collective (ARC), a who’s who of Australian rock music comprising members of four iconic Australian rock bands.

The full list of Australian Event Awards winners can been found by clicking here.