Advertisement
In the wake of significant demand, Garuda Indonesia has increased flights on the Sydney to Jakarta route from three to seven per week.

In the wake of significant demand, Garuda Indonesia has increased flights on the Sydney to Jakarta route from three to seven per week. 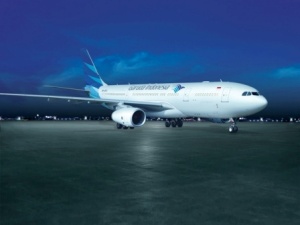 Garuda’s new daily operation came in response to passenger bookings from Sydney to Jakarta, which overtook Bali by 10% during November and December.

Garuda Indonesia’s Senior General Manager Australia/SWP, Bagus Y. Siregar, said the additional flights came as the airline continued to grow its Jakarta base, particularly as a hub for flights to Asia and Europe.

“At Garuda we have invested heavily in both our aircraft and onboard travel experience,” he said. “In addition to our award winning service concept – the Garuda Indonesia Experience – our corporate and leisure passengers have the convenience of ‘visa on board’ services, a world first in airline offerings.

“We foresee that this leading in-flight experience combined with daily services from Sydney to Jakarta will provide our customers with endless opportunity for travel and encourage the continued growth of Jakarta not only as popular Indonesian destination but as Asia’s newest gateway to the globe,” he said.

Garuda Indonesia’s reputation has continued to climb with its fleet and service – the airline won a swag of awards in 2010, including ‘Asia’s leading service quality airline’ by the Centre for Asia Pacific Aviation.