Advertisement
Sydney Showground has announced that a new, purpose built exhibition pavilion will be constructed at the Showground in the coming months to meet with growing demand

Sydney Showground general manager, Peter Thorpe, has announced that a new, purpose built exhibition pavilion will be constructed at the Showground in the coming months to meet with growing demand. 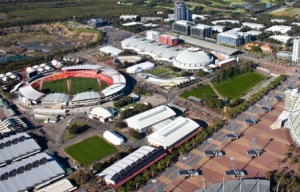 Thorpe stated that, ‘It’s no news to anyone that demand for space will be at a premium from the end of 2013. We currently already hold some of Sydney’s major exhibitions such as AIMEX, AusPack and Home & Giving to name just a few, with a number of other exciting expos coming on board from 2014.

“We are also host to a number of other large events including music festivals such as Big Day Out and Soundwave, plus we are proud to be home to AFL’s newest team, Greater Western Sydney (GWS) Giants,” he added.

“We need to ensure that our planning is robust and future focussed and that our infrastructure is therefore capable of taking on any challenge that organisers and promoters throw at us.”

The new exhibition pavilion will accommodate the foreseen extra demand and complements last year’s $64m upgrade of Sydney Showground Stadium, which has now put Sydney Showground in the position to compete for and win high profile events such as February’s Swedish House Mafia, One Last Tour concert.

The new building will lie adjacent to the Dome and Halls and will interface with the existing Southee Complex (requiring the removal of the Badgery Pavilion). Depending upon the response from the respondents to the Tender process the new pavilion is intended to provide approximately 8,500sqm of useable exhibition and event space dividable into two separate facilities by an operable wall should a smaller space be required. The total footprint when complete inclusive of the retained Southee Complex will be approximately 11,000sqm.

The new building is due for completion in early 2014 and will be marked by an official opening and naming ceremony.

Full details of the intended design will be known at the conclusion of negotiations following the Tender period expected to be in mid to late May.