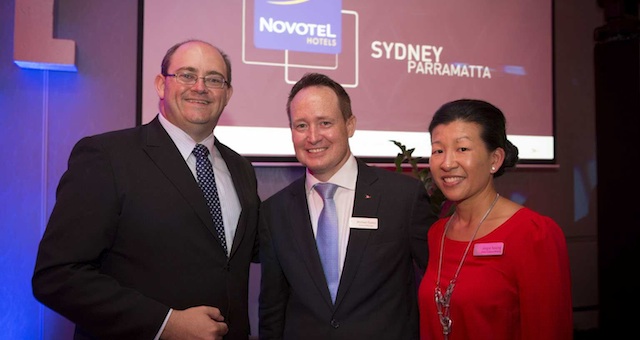 Novotel Sydney Parramatta general manager Michael Daviss said, “The ‘back to bare’ concrete transformation has been such a success. My team and I have been humbled by the overwhelming positive feedback on the refurbishment, especially the Lennox Ballroom.

“This new space will deliver the ‘wow’ back into Parramatta which has been declared to be a ‘city of the future’ during the recent Parramatta Chamber of Commerce’s State of the City Address in this very hotel. The hotel is proud to be a key player in boosting Parramatta and Western Sydney as a destination for events and tourism,” said Daviss.

Lord Mayor of Parramatta Cr Scott Lloyd said, “These refurbished conference facilities reflect the growing importance of Parramatta as a business destination. It cements Parramatta’s role within Sydney as a viable alternative for business functions. Novotel Sydney Parramatta has also refurbished its rooms to make it more attractive to stay and experience the many other activities such as Eat Street, Riverside Theatre, Rosehill Gardens Racecourse, heritage and sporting events that Parramatta and Western Sydney offers.”

The Lennox Ballroom is the largest pillarless hotel ballroom in the Parramatta region and the conference and event spaces can cater for meetings of 5 people up to 550 people.

With new projection equipment using HD format as well as HDMI compatibility throughout all conference spaces, delegates will also have access to the fastest hotel internet in the region as the hotel has installed a new dedicated 20mb/20mb pipe which allows for over 750 devices to access highspeed WiFi facilities at one time.