On the morning of our final day at the MediaConnect 2009 Kickstart conference, delegates still recovering from the evening’s festivities congregated in the breakfast hall at the Hyatt Regency Sanctuary Cove for a very bright start to the day.

Although ‘breakfast hall’ implies this room was transplanted here from an English holiday camp, it was anything but. Furnished with post-Art Deco furniture and set amongst the faux wildlife of the resort, it was more reminiscent of 1930’s colonial Africa than 1960’s Huddersfield.

After devouring both breakfast and the morning newspaper, we moved back to the session rooms for our concluding meetings. It was here that we realised our conference dovetailed with SwimFashionWeek, as evidenced by the settlement of a growing number of young models in the designate meeting places. Few of us seemed to have pre-existing knowledge of this crossover and for us it was pure serendipity. 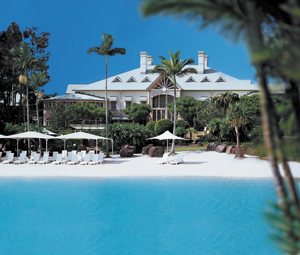 In order to enable remote filing of stories whilst on this retreat, the conference organisers had set up video recording booths, podcasting stations and a media room with general use notebooks and Internet. This was good planning, as too often attendees will be reluctant to lug around their own laptop, constantly plugging it in and establish connections.

For the conference itself, on the first day, journalists were invited to ‘speed date’ with vendors; moving amongst continuously evolving press conferences, asking questions and taking notes. If there was a particular subject we wanted to extrapolate, one-on-one interviews of varying length could then be arranged for this later day.

There was some consternation about this format, with journalists reluctant to give up potential exclusives by discussing their subject matter publicly.

Once work was out of the way, stories filed and deadlines met, the younger crowd quickly changed into their costumes and headed for the pool, which by now was populated almost exclusively by swimwear models.

It had been an instructive, enjoyable and worthwhile conference. The organiser MediaConnect and the Hyatt Regency Sanctuary Cove did an excellent job.

But there was still the matter of getting home. Our bags were packed onto a bus and we hit the highway for the 45-minute drive to Gold Coast. Tired and looking forward to returning to work proper the next day, we filed onto JQ412 for the bumpy ride south. Once again, we were all sitting together – a feat of seat allocation that still amazes.